I was recently tasked with setting up a MongoDB Replicaset.

Documentation for setting up a MongoDB Replicaset with OpsWorks was a bit on the sparse side and took a bit of trial and error. I ended up with this solution.

The chef recipe used for this post is https://github.com/netinlet/chef-mongodb_replicaset

OpsWorks allows you to use custom recipes. All dependent recipes should be included in the custom cookbook.

The dependencies for this cookbook were pulled from the OpsCode public cookbooks. https://github.com/opscode-cookbooks

The mongodb recipe is custom. I ended up using this recipe referenced in the presenation AWS OpsWorks under the hood.

The custom recipe is based off of https://github.com/edelight/chef-mongodb with OpsWorks specific code to properly setup replicasets in AWS OpsWorks.

I’m going to assume some degree of familiarity with OpsWorks. If you are new to AWS OpsWorks, you can get an overview here: http://aws.amazon.com/opsworks/

Add a MongoDB layer to your stack

Create a “Custom” layer named MongoDB and add it to the stack.

A custom layer is pre-defined with 12 built-in recipes. Nothing to do or change here.

Repository URL Set the repository URL to the location of your chef recipe. This repository can be a link to a Git or Subversion repository or an http or S3 url. The custom recipe is configured in the Stack settings in which your layer lives. In this case, I have it pointed to my Github chef recipe.

OpsWorks has 5 lifecycle events which can be used to execute Chef recipe steps. These events are setup, configure, deploy, undeploy and shutdown. For this recipe, we will use the setup and configure events.

Setup event Add mongodb::10gen_repo and mongodb::default. The former configures the service to use the 10Gen MongoDB builds. The latter installs MongoDB and does a basic single node configuration.

Configure event Add mongodb::replicaset. This event configures the MongoDB instance as a member of a replicaset. 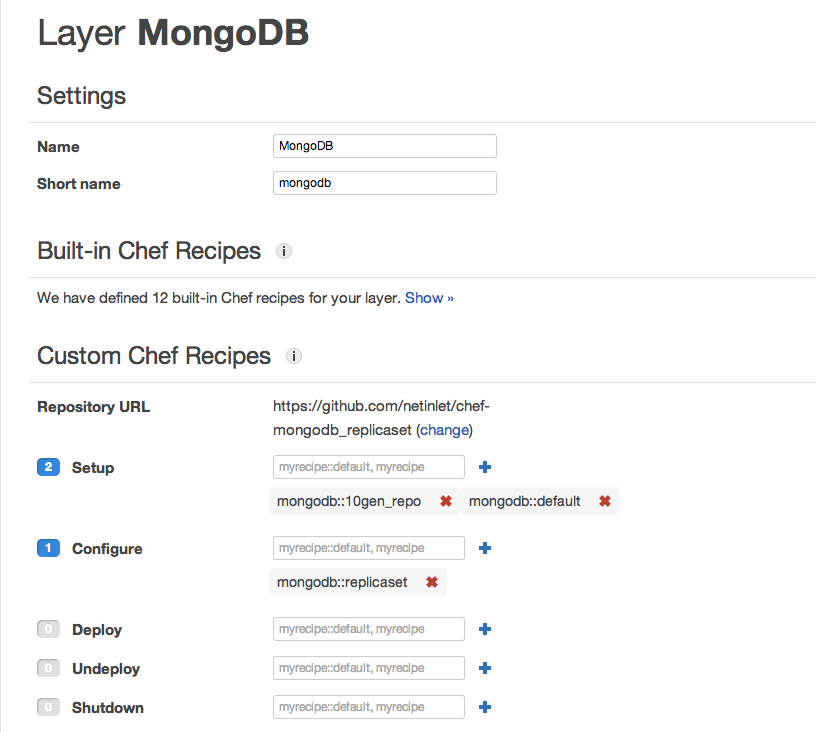 Custom Chef JSON In order for the replicaset to be configured properly, we have to specify the name of the replicaset, cluster and tell the instance to auto-configure.

The replicaset_name and cluster_name must match. You must also set the auto_configure:replicaset hash value to true so the replicaset is auto-configured on boot.

Add some instances to the MongoDB layer and boot them. An odd number of instances (3 or more) is the proper way to configure a replicaset without an arbiter.

This is evident in the logs of the second instance. This error indicates the node was unreachable at the time it was being configured. See line 4.

The work-around is to run the mongodb::replicaset recipe again from the Stack section of OpsWorks with the Run Command button. 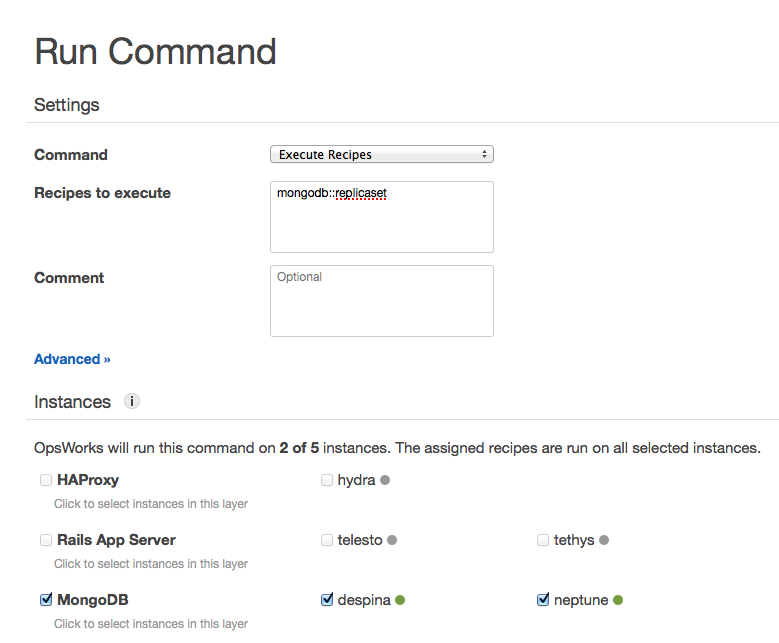 *Note: MongoDB instance names changed because I removed the nodes before realizing the original screenshot did not get saved properly.

If everything was successful, you should be able to ssh to your MongoDB instances and look at the MongoDB configuration with the commands mongo to connect to the instance and rs.conf() to show the current replicaset configuration.

This screenshot shows the before and after of the above mentioned mongodb::replicaset command work-around.